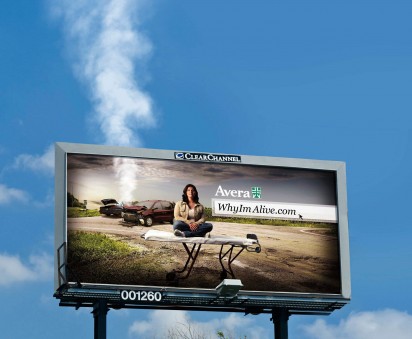 For two days, drivers who passed a smoking billboard in Sioux Falls, honked and cranked their necks to get a better look at the board everyone was talking about. The billboard, promoting the website WhyImAlive.com, for Avera Health was meant to draw attention for the importance of having an emergency medical plan for your family. It showed a woman sitting on a gurney in front of a terrible car crash, with one of the cars actually smoking behind her, that at least for two days, the smoke billowed off the photo into the sky, thanks to a hidden smoke machine behind the board.
It worked, driving thousands of people to go online in the first week of the campaign. It also drew an unintended consequence. It got the attention of the fire department, who, after two days of smoke, decided to shut it down.